"Debenedetti (1901-1967), one of Italy's most influential literary critics, editors and literature professors, endangered his career championing unfashionable avant-garde writing by Umberto Saba, Italo Svevo and Marcel Proust. Gilson's nuanced translation of this indispensable Holocaust document introduces U.S. readers to a formidable Jewish intellectual. Written in 1944, when the event was still an open wound, this charged, devastating account of the Nazi seizure of "the Pope's Jews" was immediately recognized as a small masterpiece. Citizens of the Eternal City for two millennia, the Roman Jews couldn't believe that the rumored atrocities on the eastern front could occur there, in the heart of Christendom, so on October 15, they ignored a disreputable woman's hysterical warnings. "Tragedy entered the stream of life and blended into it with such terrifying naturalness that from the first there was no room for anything, not even astonishment," writes Debenedetti. Before deporting more than 1,000 Roman Jews (fewer than a dozen returned from Auschwitz), the Nazis extorted gold and seized the Jewish community's magnificent libraries. Gilson skillfully renders Debenedetti's heartbreaking evocation of Rome's mood that autumn. In Eight Jews, an essay written after the 1944 Nazi massacre of 335 men and boys in the Ardeatine Caves in reprisal for a partisan attack, Debenedetti provocatively argues that eight Jews originally on the list to be executed were removed for the wrong reasons. For Debenedetti, equality meant no special treatment, even as recompense for injustices. Gilson's essay on the fate of the Jewish libraries and Alberto Moravia's preface round out this short, immensely fertile book on the Holocaust in Italy." 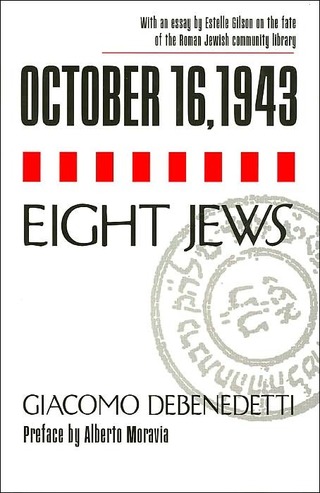