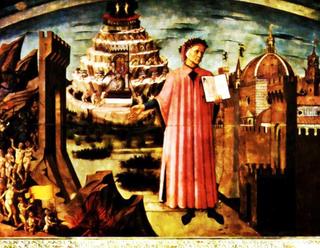 No translation of Dante's Commedia can reflect
the genius and ingenuity of the author's original work. Dante's use of language, poetry, symbolism; his political, philosophical and religious concepts, so interwoven with his narrative, have made the Commedia an unending source of wonder and study, and an eternal subject for translation.
But his narrative is worth knowing for itself. Here is my start in telling it.

Dante starts out on his journey

When I had traveled half of life's course, I woke to find myself in a dark wilderness with no clear path in sight. It's still hard for me to describe how fierce, dense and deep that wilderness was. Just thinking of it recalls a fear so bitter that death seems hardly worse. Yet good befell me in that place, and to tell of that, I'll speak of other things I found there

I can't really say how I came to be in that wood, I was too overcome with sleep when I wandered off the right path. But when I got to the foot of a hill,at the end of the vale which had struck terror through my heart, and looked up at it, I saw that the rays of the sun which guides people rightly by every road had begun clothing its shoulders. Then the fears that had pooled deep in my heart during that piteous night, subsided a little. And like a gasping swimmer, who, after escaping the ocean and setting foot on shore, turns back to stare at the treacherous waters, so my mind, still bent on flight, turned back to look at that vale from which no one had ever emerged alive.

I rested my weary body for a while then resumed my way up a desert slope in such a way that my lower foot was always the firmer, when there, just before the ascent steepened, stood a leopard, looking lithe and very fleet in its spotted coat. Not only didn't it leave on seeing me, but it blocked my way, so that I turned back several times.

It was early morning and the sun was rising higher along with the stars that were with it, when Divine Love first moved those things of beauty. So that the time of day and the gentleness of the season gave me reason to hope for good from that gaily mottled beast. But not so much that I wasn't frightened at seeing a lion appear. It seemed to be coming toward me with its head high and roaring so with hunger that it made the air tremble. Then a she-wolf appeared, whose leanness bespoke every appetite and all the lives to which she'd brought despair. The sight of her weighed upon me with such fear that I lost hope of ever reaching the mountain top. Like someone thrilled to have been winning, who, when he must face losing, weeps and grieves, my every thought was a lament as that restless beast forced me slowly, step by step, back to where the sun is silent.

And while I retreated into the depth, someone long silent, appeared dimly to me. Seeing him in that vast wilderness, I shouted, "Whatever you are, shade or man, have pity on me."

"I am not a man," he answered, "though once I was. My parents were Lombards, both of them, born in Mantua. I was born under Julius, though late in his reign, and lived under the good Augustus in Rome in the era of false and lying gods.

I was a poet and sang of that just son of Anchise who came from Troy after proud Ilium burned. But why are you walking back toward so much misery? Why aren't you climbing the mountain of delight, the source and cause of every joy?"

"Then you are Virgil, that fountain that pours forth so large a stream of speech?" I said, timidly. "Oh, glory and light of all other poets. May the long study and great love that made me plumb your works, serve me now. You are my master and my author. From you, and you alone, I took the fair style that has brought me honor. You see the beast that made me turn back. Help me counter her, oh famous sage. She makes my blood and pulses tremble."

"You will have to take another path if you want to escape this wilderness," he said on seeing my tears, "for this beast causing you to lament, never allows anyone to pass her, but besets all to the point of death. Her nature is so evil and malicious that her greed and wants are never satisfied. After a meal she is hungrier than before. She mates with many creatures and will go on doing so until the coming of the Greyhound, who will kill her painfully. He will not feed on land and riches, but on wisdom, love and virtue. He will be born between two Feltros, and will be the salvation of that low Italy, for which Eurialo, Turno, Niso, and the virgin Cammilla suffered wounds and died. He will pursue that beast through every town until he drives her back into Hell from which envy first sent her. For now, in my judgment, I think it best that you follow me. I will be your guide and lead you out of here through an eternal place, where you will hear desperate shrieks and see ancient suffering spirits, all of them lamenting their second death. And you will see those who are content within the fire because they are hoping for the day, whenever it may come, that they will rise to be among the blessed. And if later you want to ascend to them too, a spirit more worthy than I will guide you. I will leave you with her when I depart. The Emperor who reigns above doesn't wish me to enter His city since I never complied with His laws. His Empire is everywhere, but that is his Kingdom. There is His city and His high throne. Oh, happy are those he chooses to be there."

And I said, "Poet, I beg you in the name of that God whom you do not know, to help me escape this evil and even worse. Take me to the place you just described that I might see St. Peter's Gate and those whom you say are so filled with woe."

Then he set out and I followed him.